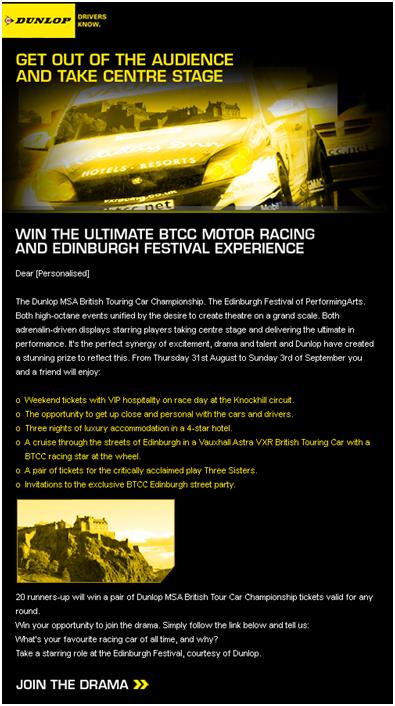 The Dunlop MSA British Touring Car Championship collaborated with Edinburgh Festival of Performing Arts to co-promote their simultaneous events in the city.

The audience were a large user base of customers who had already opted in to receiving promotional emails from Dunlop and the brief was to draw a connection in a competition promo email that successfully illustrated the between the two events and persuade the audience that both had exciting experiences on offer.

I decided that the clear connection between the two was the idea of theatre and performance, and of scale and excitement. In a word – drama. Using this theme I went with the opening line of “Get out of the audience and take centre stage”.

The call-to-action became “Join the drama”. Other vocabulary peppered throughout included high-octane, adrenalin-driven, centre stage. In this way I was able to relate the two events and create an email communication with real attention grabbing impact.